Crown Street Public School is an oasis in the inner city, situated near Oxford Street and Taylor Square. Its impressive Victorian Gothic facade belies the fact that it is a school. Established in 1849 and moving into its grand new building in 1879 makes it one of the oldest continuing schools in Australia. The school's mission statement states that "Crown Street Public School aims to provide an equitable and excellent primary education in a positive, caring, secure learning environment which caters for individuals of different cultures and socio-economic backgrounds". In addition, Crown Street Public School is a school with a long and proud tradition of tolerant and non-violent behaviour. There is an underlying atmosphere of autonomy and responsibility in which children grow and learn.

Proudly serving our community since 1849 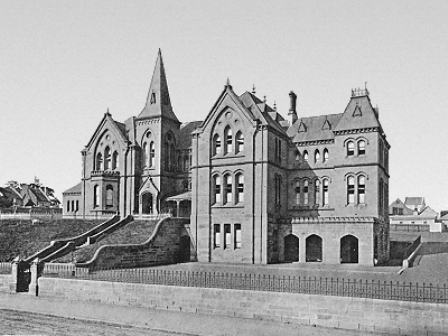 In 1999, Crown Street Public School celebrated its sesquicentenary. Crown Street Public School was first established on June 1st 1849 and is one of the earliest in Australia. The founding Headmaster was William Phillips who was provided with a rent-free residence and a salary of 40 pounds per annum which was supplemented by fees from the pupils according to the usual custom of the time. At this time Public Education in NSW was one year old. Between 1820-1848 schools were very scarce in NSW and were predominantly run by churches for children of the wealthy.

Crown Street Public School at 365 Crown Street, Surry Hills has a long illustrious past. Due to strict heritage guidelines the present school is still as it was then with the addition of The Lone Soldier Cenotaph built in 1919 in memory of the many ex-students who enlisted to fight on the battlefields of world war one. This soldier has become a landmark in Surry Hills and celebrated his 80th birthday in 1999.

The school can claim many famous scholars and sports people amongst its ex-students These include Victor Trumper, often described as one of Australia's most outstanding sportsman; M.A Noble; Sir Garfield Barwick and Sir Nicholas Shehadie.

Return to top of page

We would like to pay our respects and acknowledge the traditional custodians of the land and also pay respect to Elders both past and present.

Copyright for this website is owned by the State of New South Wales through the Department of Education. For more information go to https://www.dec.nsw.gov.au/footer/copyright.